Because the theory of gravity breaks down near a black hole, detailed observations could lead to breakthroughs in our understanding of physics. Upgraded telescopes, improved instruments, and artificial intelligence can help us study these galactic monsters.

The weirdness exhibited by black holes boggles the mind. Formed when a star burns all its nuclear fuel and collapses under its own gravitation, black holes are such oddities that at one time, even Einstein didn’t think they were possible.

They are regions in space with such intense gravitation that not even light escapes their pull. Once magnificent shining stars burn out and shrink to a relatively tiny husk, all their mass is concentrated in a small space. Imagine our Sun with its diameter of roughly 1.4 million kilometers (87,000 miles) shrinking to a black hole the size of a small city just six kilometers (3.7 miles) across. This compactness gives black holes immense gravitational pull.

Not only do they trap light, but black holes can also shred any stars they encounter and even merge with each other. Events like this release bursts of energy that are detectable from billions of light years away.

The Nobel Prize in Physics 2020 was shared by scientists who discovered an invisible object at the heart of the Milky Way that pulls stars towards it. This is a supermassive black hole, or SMBH, and it has a mass that is millions of times that of our sun.

“At the heart of every massive galaxy, we think there is a supermassive black hole,” said astrophysicist Dr. Kenneth Duncan at the Royal Observatory in Edinburgh, UK. “We also think they play a really important role in how galaxies form, including the Milky Way.”

Supermassive black holes are gravitating monsters of the Universe. “Black holes at the center of galaxies can be between a million and a few billion times the mass of our Sun,” said Professor Phillip Best, astrophysicist at the University of Edinburgh.

“At the heart of every massive galaxy, we think there is a supermassive black hole.”

They pull in gas and dust from their surroundings, even objects as large as stars. Just before this material falls in towards the black hole’s event horizon or point of no return, it moves quickly and heats up, emitting energy as energetic flashes. Powerful jets of material that emit radio waves may also spew out from this ingestion process.

These can be detected on Earth using radio telescopes such as Europe’s LOFAR, which has detectors in the UK, Ireland, France, the Netherlands, Germany, Sweden, Poland, and Latvia.

Duncan is tapping LOFAR observations to identify the massive black holes in a project called HIZRAD. “We can detect growing black holes further back in time,” said Duncan, “with the goal being to find the very first and some of the most extreme black holes in the Universe.”

LOFAR can pinpoint even obscured black holes. Duncan has used artificial intelligence techniques to combine data from LOFAR and telescope surveys to identify objects of interest.

Dome of the William Herschel Telescope at the Roque de los Muchachos Observatory, La Palma in the Canary Islands.

Better instruments will soon assist in this task. An upgrade to the William Herschel Telescope on La Palma, Spain, will allow it to observe thousands of galaxies at the same time. A spectroscope called WEAVE has the potential to detect supermassive black holes and to observe star and galaxy formation.

Radio signals indicate that supermassive black holes exist from as early as the first 5-10% of the Universe’s history. These are a billion solar masses, explained Best, who is the research supervisor.

The surprising part is that these giants existed at the early stages of the Universe. “You’ve got to get all this mass into a very small volume and do it extremely quickly, in terms of the Universe’s history,” said Best.

We know that following the Big Bang, the Universe began as an expanding cloud of primordial matter. Studies of the cosmic background radiation indicate that eventually clumps of matter came together to form stars. However, “The process where you form a blackhole as large as a billion solar masses is not fully understood,” said Best.

While studies of SMBHs are ongoing, Dr. Peter Jonker, an astronomer at Radboud University in Nijmegen, the Netherlands, is intrigued by the formation of black holes of intermediate scale.

He is studying the possible existence of intermediate black holes (IMBH) with the imbh project. He notes that supermassive black holes have been observed from when the Universe was only 600 million years old. Scientists estimate the overall age of the universe to be around 13.8 billion years.

“The Universe started out like a homogenous soup of material, so how do you get clumps that weigh a billion times the mass of the sun in a very short time?” said Jonker.

While supermassive black holes might consume sun-like stars (called white dwarfs) in their entirety, IMBHs should be powerful enough to only shred them, emitting a revealing flash of energy.

“The Universe started out like a homogenous soup of material, so how do you get clumps that weigh a billion times the mass of the sun in a very short time?”

“When a compact star, a white dwarf, is ripped apart, it can be ripped only by intermediate-mass black holes,” said Jonker. “Supermassive black holes eat them whole.” There are strong indications that intermediate black holes are out there, but there’s no proof yet.

He is searching for flashes of intense X-ray energy to indicate the presence of an intermediate black hole. The problem is when signals are detected, the intense flashes last just a few hours. This means the data arrives too late be able to turn optical telescopes towards the source for observations.

“This happens once in 10,000 years per galaxy, so we haven’t seen one yet in our Milky Way,” said Jonker.

Jonker also seeks to observe the expected outcome of two black holes spinning and merging, then emitting a gravitational wave that bumps nearby stars. However, to discern these stars being jolted necessitates powerful space-based telescopes.

The Gaia satellite, launched in 2013, is providing some assistance, but a planned mission called Euclid will take higher resolution images and may help Jonker prove IMBHs exist. This satellite was due to be launched on a Russian rocket; it will now be launched with a slight delay on a European Ariane 6 rocket.

Nonetheless, a small satellite – the Chinese Einstein Probe – is scheduled for launch in 2023 and will look out for flashes of X-ray energy that could signify intermediate black holes. Duncan in Edinburgh says that the search for intermediate black holes ties in with his own quest. “It can potentially help us solve the question of where the supermassive ones came from,” he said.

Right now, physicists rely on quantum theory and Einstein’s equations to describe how the Universe works. These cannot be the final say, however, because they do not fit well together.

“The theory of gravity breaks down near a black hole, and if we observe them closely enough,” said Jonker, “Our expectation is that we will find deviations from the theory and important advances in understanding how physics works.”

This article was originally published in Horizon, the EU Research & Innovation Magazine. 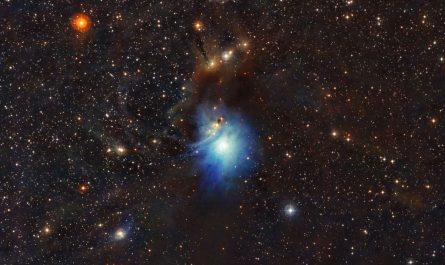 This is a Classic Example of a Reflection Nebula, Where the Reflected Light From Young Hot Stars Illuminates a Protostellar Cloud of Gas and Dust