University of Virginia scientists have solved a decades-old mystery.

Researchers from the University of Virginia School of Medicine and their colleagues have solved a long-standing mystery concerning how E. coli and other bacteria move.

Bacteria move forward by coiling their long, threadlike appendages into corkscrew shapes, which serve as makeshift propellers. However, since the “propellers” are formed of a single protein, experts are puzzled as to how exactly they do this.

The case has been solved by an international team headed by UVA’s Edward H. Egelman, Ph.D., a pioneer in the high-tech field of cryo-electron microscopy (cryo-EM). Cryo-EM and powerful computer modeling were utilized by the researchers to reveal what no traditional light microscope could see: the unusual structure of these propellers at the level of individual atoms.

“While models have existed for 50 years for how these filaments might form such regular coiled shapes, we have now determined the structure of these filaments in atomic detail,” said Egelman, of UVA’s Department of Biochemistry and Molecular Genetics. “We can show that these models were wrong, and our new understanding will help pave the way for technologies that could be based upon such miniature propellers.”

Edward H. Egelman, Ph.D., of the University of Virginia School of Medicine, and his collaborators have used cryo-electron microscopy to reveal how bacteria can move — ending a mystery of more than 50 years. Egelman’s prior imaging work saw him inducted into the prestigious National Academy of Sciences, one of the highest honors a scientist can receive. Credit: Dan Addison | University of Virginia Communications

Different bacteria have one or many appendages known as a flagellum, or, in the plural, flagella. A flagellum is made up of thousands of subunits, all of which are identical. You’d imagine that such a tail would be straight, or at least somewhat flexible, but it would prevent the bacteria from moving. This is due to the fact that such shapes cannot generate thrust. A rotating, corkscrew-like propeller is required to move a bacterium forward. Scientists call the development of this shape “supercoiling,” and they now know how bacteria do it after more than 50 years of research.

Egelman and his colleagues discovered that the protein that makes up the flagellum may exist in 11 different states using cryo-EM. The corkscrew shape is formed by the exact combination of these states.

It has been known that the propeller in bacteria is quite different than similar propellers used by hearty one-celled organisms called archaea. Archaea are found in some of the most extreme environments on Earth, such as in nearly boiling pools of acid, the very bottom of the ocean and in petroleum deposits deep in the ground.

Egelman and colleagues used cryo-EM to examine the flagella of one form of archaea, Saccharolobus islandicus, and found that the protein forming its flagellum exists in 10 different states. While the details were quite different than what the researchers saw in bacteria, the result was the same, with the filaments forming regular corkscrews. They conclude that this is an example of “convergent evolution” – when nature arrives at similar solutions via very different means. This shows that even though bacteria and archaea’s propellers are similar in form and function, the organisms evolved those traits independently.

“As with birds, bats, and bees, which have all independently evolved wings for flying, the evolution of bacteria and archaea has converged on a similar solution for swimming in both,” said Egelman, whose prior imaging work saw him inducted into the National Academy of Sciences, one of the highest honors a scientist can receive. “Since these biological structures emerged on Earth billions of years ago, the 50 years that it has taken to understand them may not seem that long.”

The study was funded by the National Institutes of Health, the U.S. Navy, and Robert R. Wagner.

Lunar eclipses: What are they & when is the next one? 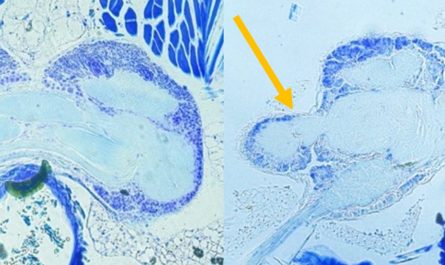 One Sip of Alcohol Is Enough To Permanently Alter Your Brain