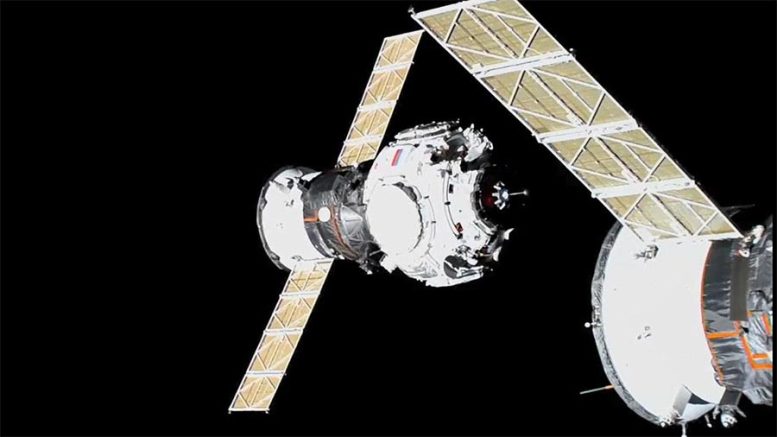 The customized Progress transport spacecraft that directed Prichal to the station will remain in place until late December.

Russias brand-new Prichal docking module gets to the station offering additional docking ports and fuel transfer capabilities. Credit: NASA
The five-ton Prichal docking module reached the International Space Station at 10:19 a.m. EST, propelled by a customized Russian Progress propulsion compartment. They docked to the Nauka module on the Earth-facing side of the Russian segment two days after taking off from the Baikonur Cosmodrome in Kazakhstan Wednesday, November 24 at 8:06 a.m. EST (6:06 p.m. Baikonur time). The spacecraft were flying about 260 miles over Ukraine at the time of docking.
To make room for Prichal, the uncrewed Progress 78 cargo craft undocked from Nauka at 6:23 a.m. Thursday, November 25, and burned up upon reentry in the Earths atmosphere later that early morning.
Prichal, named for the Russian word for pier, has five offered docking ports to accommodate numerous Russian spacecraft and provide fuel transfer ability to the Nauka module. Named for the Russian word for “science,” Nauka released to the spaceport station in July.