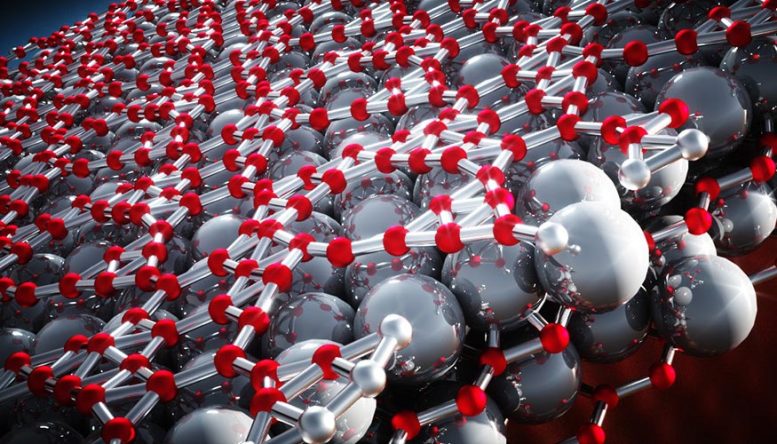 The LLNL team showed that in numerous cases, these atoms really disorder dynamically: an unexpected phenomenon in contrast to standard understanding of how most solid-state surfaces act. Disordered surface areas produce an entire range of surface reactivities. If we can utilize this capability, it could be a brand-new technique for custom-tuning surface performance for faster energy storage and conversion,” said LLNL materials researcher and co-author Brandon Wood, who leads the LLNL group on materials-based hydrogen storage.

Disordered boron surface structure of magnesium diboride probed by atomistic modeling. Credit: LLNL
Lawrence Livermore National Laboratory (LLNL) researchers have actually discovered that atomic condition in specific boron-based hydrogen storage systems can possibly enhance the rate of hydrogen uptake.
Metal boride surfaces and their single-layer versions– known as borophenes– are usually believed to include a regular plan of atoms at low to moderate temperature levels. The LLNL group proved that in most cases, these atoms in fact disorder dynamically: a surprising phenomenon in contrast to traditional understanding of how most solid-state surfaces act. The surface area disorder means each atomic site has different local residential or commercial properties. According to the teams research, some of these sites can make dissociation of hydrogen molecules much easier, which in turn is expected to accelerate activation of the product throughout hydrogen storage.
The findings have implications for other applications, too. In addition to hydrogen storage, metal borides and borophenes can be used for superconductivity, electrocatalysis, optoelectronics and as coverings for thermal and deterioration resistance. In several of these applications, the speciﬁc boron surface atom arrangements play an outsized role in identifying the total efficiency.

The FDA Approved a New Drug To Treat Alzheimer’s, but Medicare Won’t Always Pay for It – A Doctor Explains Biogen’s Aduhelm

A Smart Electric Grid Could Save Consumers $50 Billion a Year