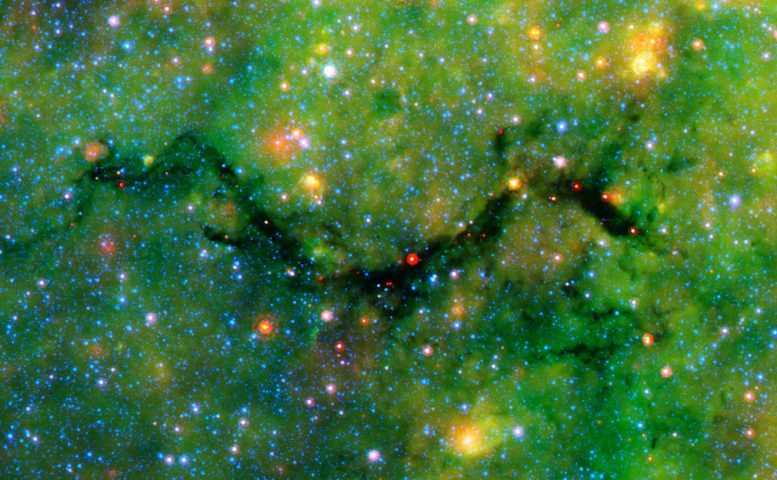 A far infrared and millimeter research study of really cold IRDCs has actually discovered proof for the early stages of star development and support for numerous theoretical situations. IRDCs are massive, cold, and abundant in the molecules needed to assist in the gravitational collapse of gas into stars, and thus IRDCs are natural websites for studying star birth. The comprehensive processes that form the development of enormous stars (those of more than a couple of solar-masses) stay unclear even after decades of research study, partly since these stars tend to form reasonably quickly and are accompanied by especially intense radiation. One theoretical situation recommends that turbulence in the gas supports the product against collapse until the core grows massive enough to overcome it; another recommends that low mass stars form first and grow into more massive stars through accretion.

A comprehensive analysis of the brand-new ALMA measurements, with spatial resolutions of about one tenth of a light-year, discovered eleven cores in the structure, and determined their masses as ranging from about one to twenty solar-masses. The observations also found four collimated outflows in the molecular emission line images, a sign that star formation has actually currently started, even at this early stage of development. Hence this IRDC can no longer be considered pre-stellar in character.
The astronomers tested the two main theoretical situations for star development versus the observed homes of the eleven cores and discovered examples that were consistent with one or even both options. The scientists argue that this sample size is still too little to reach any clear conclusions, however that the analysis of the cores in the complete sample of IRDCs in the 70 micron dark study will ultimately provide sufficient statistics to constrain the models.
Reference: “The ALMA Survey of 70 μm Dark High-mass Clumps in Early Stages (ASHES). IV. Star Formation Signatures in G023.477” by Kaho Morii, Patricio Sanhueza, Fumitaka Nakamura, James M. Jackson, Shanghuo Li, Henrik Beuther, Qizhou Zhang, Siyi Feng, Daniel Tafoya, Andrés E. Guzmán, Natsuko Izumi, Takeshi Sakai, Xing Lu, Ken ichi Tatematsu, Satoshi Ohashi, Andrea Silva, Fernando A. Olguin and Yanett Contreras, 16 December 2021, The Astrophysical Journal.DOI: 10.3847/ 1538-4357/ ac2365.

An infrared picture of an infrared dark cloud (IRDC) taken by the IRAC electronic camera on the Spitzer Space Telescope. The dark filament of product is very cold, abundant in particles, and a possible birth place for new stars. A far infrared and millimeter study of very cold IRDCs has actually discovered proof for the early stages of star formation and support for a number of theoretical circumstances. Credit: NASA, JPL-Caltech/S. Carey (SSC/Caltech).
Infrared dark clouds (IRDCs) are dark spots of cold dust and gas seen in the sky against the brilliant scattered infrared radiance of warm dust in our galaxy. IRDCs are huge, cold, and rich in the particles required to facilitate the gravitational collapse of gas into stars, and for this reason IRDCs are natural websites for studying star birth. The detailed procedures that form the development of huge stars (those of more than a few solar-masses) stay uncertain even after decades of research study, partly due to the fact that these stars tend to form fairly quickly and are accompanied by particularly extreme radiation. One theoretical circumstance recommends that turbulence in the gas supports the product against collapse till the core grows enormous enough to conquer it; another suggests that low mass stars form initially and grow into more massive stars through accretion.
CfA astronomer Qizhou Zhang was a member of a team that used the ALMA millimeter variety to study 70 micron dark regions where young, high mass clumps were seen. The survey looked at a lots IRDCs and first-look results reported that about half of the cores were smaller sized than about one solar-mass– and no cores were found bigger than thirty solar-masses.
The IRDC G023.477 +0.114, one of the twelve clouds in the survey, lies about sixteen thousand light-years away. It contains about one thousand solar-masses of product, and was chosen since it had been regarded as an enormous, starless cloud with the potential of forming high-mass stars. Spectroscopic measurements discovered that its dense gas was not unstable, indicating that turbulence (at least in this case) was not a factor in supporting the cores versus collapse into stars.