The image was taken control of the easternmost part of Noctis Labyrinthus at 265.8 ° E/8.70 ° S in the Phoenicis Lacus Quadrangle, near the crossway with Lus Chasma of Valles Marineris– the grand canyon of Mars.
TGO got to Mars in 2016 and started its full science objective in 2018. The spacecraft is not only returning amazing images, but likewise providing the best ever inventory of the planets climatic gases, and mapping the worlds surface area for water-rich areas. It will also offer data relay services for the second ExoMars mission consisting of the Rosalind Franklin rover and Kazachok platform, when it shows up on Mars in 2023.

Credit: ESA/Roscosmos/CaSSIS, CC BY-SA 3.0 IGO.
Theres more to this picture of Mars than very first fulfills the eye: nestled in the information of the cliff face that cuts through this scene are signs of geology in movement. Focusing exposes a number of stones that have fallen from the cliff edge, leaving little dimples in the soft material as they tumbled down-slope.
The image was taken by the CaSSIS video camera onboard the ESA/Roscosmos ExoMars Trace Gas Orbiter on August 3, 2020, and captures a piece through the maze-like system of the appropriately called Noctis Labyrinthus. The cliff-like function going through the central part of the image becomes part of a horst-graben system, which consists of raised ridges and plateaus (horst) either side of sunken valleys (graben) created as a result of tectonic processes that pulled the worlds surface area apart. The whole network of plateaus and trenches making up Noctis Labyrinthus covers some 1200 km, with private cliffs reaching 5 km above the surface below.
In other places in this image and in specific towards the right-hand side are spots of linear ripples that have been shaped by the wind. A couple of little effect craters also pockmark the scene.

Ancient comet with huge nucleus headed towards our cosmic vicinity 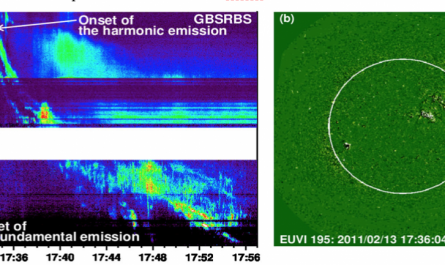