The International Space Station is pictured from the SpaceX Crew Dragon Endeavour during a fly around of the orbiting lab that took place following its undocking from the Harmony module’s space-facing port on November 8, 2021. Credit: NASA

A busy week of critical research benefitting humans living on and off the Earth kicked off for the seven Expedition 67 residents of the International Space Station (ISS). The orbital residents also continued supporting the ISS’s vast array of flight, research, and life support systems.

Astronauts Bob Hines of NASA and Samantha Cristoforetti of ESA (European Space Agency) took turns on Monday cleaning hardware and supporting samples for a biology investigation that is exploring skin healing in space. Observations may provide insights into improving wound healing therapies for both astronauts and Earthlings. Hines then spent the afternoon installing seed cartridges and root modules for the XROOTS space agriculture study to begin a 30-day growth period of radishes and mizuna greens. The research uses hydroponics and aeroponics techniques to learn how to produce crops on a larger scale on future manned missions to the Moon, Mars, and beyond.

Spacewalker Samantha Cristoforetti of ESA (European Space Agency) works outside the Nauka multipurpose laboratory module on the International Space Station while wearing a Russian Orlan spacesuit. During the spacewalk on July 21, 2022, which lasted seven hours and five minutes, she outfitted the European robotic arm attached to Nauka during. Credit: NASA

NASA Flight Engineer Kjell Lindgren opened up the Kibo laboratory module’s airlock and retrieved an external science platform. He also installed a small satellite deployer on the research gear. The deployer will be placed outside Kibo in the vacuum of space before deploying a set of CubeSats into low-Earth orbit for a variety of research and education programs.

NASA astronaut Jessica Watkins started her morning with cable connections inside a refrigerator-sized research rack called the Combustion Integrated Rack (CIR). The CIR is located in the U.S. Destiny laboratory module and enables safe examinations into the behavior of fuels, flames, and soot, in weightlessness. Watkins then assisted Lindgren in the afternoon as he installed a barrier on the Quest airlock’s vent relief and isolation valve to prevent inadvertent contact with the life support device. 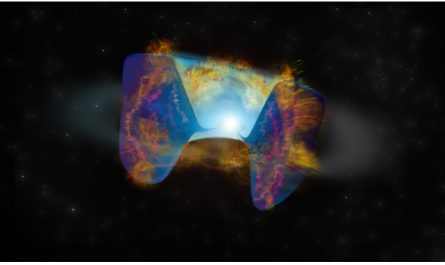 Houston, you are go for a spacewalk: ‘The Infinite’ launches VR space station tours

Planet 9 is Running out of Places to Hide