According to a World Health Organization (WHO) report, approximately half a million people worldwide suffer a spinal cord injury (SCI) each year as a result of accidents and other causes. Over 17,500 cases of total SCI cases are reported annually in the US alone, and since the spine is a delicate body part with very little power of regeneration, the injury is typically troubling for a long time.

There is no known treatment strategy that guarantees sure and permanent relief from SCI. However, now a team of researchers at the University of Aveiro in Portugal has created a biomaterial that offers a promising way to treat SCIs. The biomaterial is composed of graphene and can be used to develop scaffold implants that would replace damaged parts of the spine in the event of a spinal cord injury.

The potential of graphene-based scaffold implant

The special biomaterial is developed under NeuroStimSpinal, a research project funded by European Union’s Horizon 2020 research and innovation program. The primary goal of this project is to develop a neural tissue scaffold that could offer effective treatment to patients suffering from SCI.

In their study, the researchers reveal that a mixture of a graphene-based material and an extracellular matrix gives rise to a 3D scaffold having structural properties similar to that of the human spinal cord.

Interestingly, the matrix which is also referred to as the “decellularised extracellular matrix” by researchers has a high amount of protein and it is produced by human body cells. It provides strength to the scaffold. The graphene part on the other side is electrically responsive and facilitates the movement of electrical impulses along the scaffold.

The researchers claim that their implant is porous and does not restrict the movement of spinal fluids, plus it is also biodegradable just like the real structure.

The researchers also performed an interesting lab experiment that successfully demonstrated the ability of the scaffold to support the growth of nerve cells. They placed neural stem cells inside the implant and ran an electrical signal through the scaffold. The stem cells inside the implant were able to give rise to glial cells and neurons — the two types of cells that form the nerve tissue that makes up the spinal cord.

These findings suggest that the scaffold could be used to take the place of any damaged part of the spinal cord. Moreover, it could function in a way similar to the replaced injured part and also enable the nerve cells in the injury region to regenerate. Therefore, allowing a patient to resume his or her natural body functions without any external support.

The scaffold is yet to prove its power

The graphene-based scaffold is indeed a promising solution to SCI but similar ideas have been proposed in the past as well. For instance, In 2020, a team of researchers at China’s Jilin University proposed polymer-based scaffold treatment methods that aimed at repairing and regenerating damaged spinal cord tissues. Similarly, this year in June, scientists at the National and Kapodestrian University of Athens came up with a study that highlighted the role of collagen-based scaffolds in treating SCIs in animals.

None of these strategies (including the current one that mentions graphene scaffolds) have been successfully tested on animal models so far — let alone humans.

The researchers also admit that it will take about a decade or so before the scaffolds are available for use in humans. One of the authors of the study and principal researcher at the University of Aveiro, Paula Marques told Nanowerk:

“I see real hope. My only frustration is that we can’t move forward faster with this research – spinal cord injury has such a big impact on human life.”

The researchers are now planning to test the miniature version of the scaffold implants on rats. If their tests turn out to be successful, this might change the way how SCIs are treated, forever.

The study is published on the European Commission website. 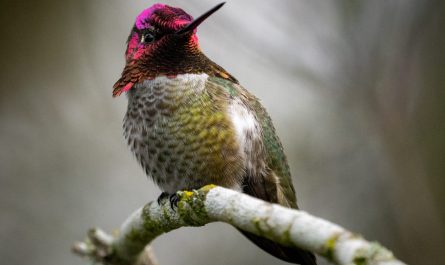 See Something Weird at the Bird Feeder? It’s Not Just You