On the 15th of April 1912, the mighty RMS Titanic sank to the bottom of the North Atlantic Ocean just four days into her maiden voyage. It’s one of the most well-known tragedies in human history, claiming about 1,500 lives and inspiring countless stories, musicals, and of course movies, including James Cameron’s blockbuster Titanic (1997). However, there are still many things we don’t know about the iconic British luxury passenger liner more than a century after it sunk.

The ship’s wreck was found extremely late, in August 1985 during an American-French expedition led by Robert Ballard, who pioneered the use of remote-controlled submersibles. Since then, many other expeditions have taken place, revealing the ship lying upright in two pieces. Some of these expeditions even retrieved artifacts from the wreckage as well as pieces of the ship itself, including a large section of the hull.

But during one expedition in 1998, explorers detected a blip on their sonars that suggested a very large, distinct object of some sort was sitting in the vicinity of the shipwreck — and ever since then, no one has been able to tell what exactly it is.

“We didn’t know what we would discover,” marine explorer PH Nargeolet, who first spotted the blip, said in a statement. “On the sonar, this could have been any number of things including the potential of it being another shipwreck. I’ve been seeking the chance to explore this large object that appeared on sonar so long ago.”

Now, the most recent expedition to the Titanic by a team that also included Nargeolet has finally solved the mystery, and it was a lot more than anyone bargained for.

Rather than some rusty metal parts or some other shipwreck, as some have suggested, the explorers found that the ‘puzzling large object’ is actually a volcanic formation that, at a depth of 2,900 meters (9,500 feet), is simply bristling with life. OceanGate, the company that funded and operated the expedition, has named the formation the Nargeolet-Fanning Ridge, a nod to the veteran explorer who first spotted the signal and to diver and mission specialist Oisín Fanning.

“We are astonished at the diversity and density of the sponges, bamboo corals, other cold-water corals, squat lobsters and fishes that are thriving at 2,900 meters deep in the North Atlantic Ocean,” said OceanGate Expeditions chief scientist Dr. Steve W. Ross.

The wreck of the Titanic itself is also a hotspot for life, having become an artificial reef over the decades. Twenty-four different species including fish, crabs, and corals were found to have made a home at the site. Now, the Nargeolet-Fanning Ridge offers a unique opportunity to compare its marine wildlife with that from the Titanic’s reef, Ross said.

Earlier this year, OceanGate made headlines when it released the first 8K video of the RMS Titanic, revealing the shipwreck in unprecedented detail. Some of the features highlighted in the video include the crane that was used to deploy the enormous 15-ton anchor still located on the deck of the shipwreck and the shackle that was originally attached to the main mast that has now collapsed.

Rory Golden, a deep-sea explorer who serves as OceanGate’s Titanic expert, said he’s already spotted something he’d never seen before in this image of the ship’s anchor:

“For example, I had never seen the name of the anchor maker, Noah Hingley & Sons Ltd., on the portside anchor,” Golden said in a press release from April 2022. “I’ve been studying the wreck for decades and have completed multiple dives, and I can’t recall seeing any other image showing this level of detail. It is exciting that, after so many years, we may have discovered a new detail that wasn’t as obvious with previous generations of camera technologies.” 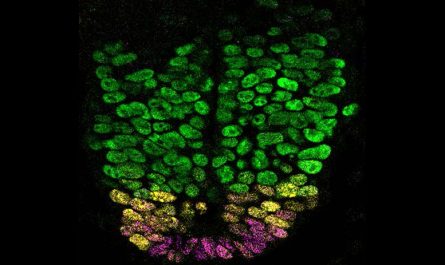